About Us
Home > History Of Oriental Holdings Berhad 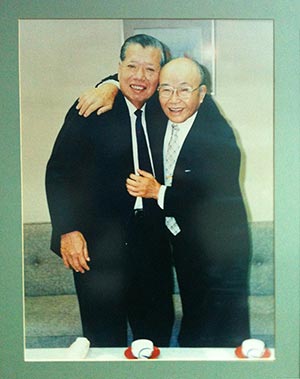 Oriental’s meteoric rise as a local company to what it is today is largely attributed to the great foresight, courage, business acumen and entrepreneurship of its founder – the late Tan Sri Dato’ Loh Boon Siew (1915 – 1995) and his ability to connect with various businesses from Japan, in particular, the special business relationship that was built up with Honda Motor Co. Ltd., Japan.

The late Tan Sri Loh arrived in Penang from Southern China at the young age of 12. With virtually no formal education and only able to communicate in Hokkien, he worked as an apprentice car mechanic and supplemented his income by washing buses at night for 10 cents per vehicle. Upon realizing the great potential for the automotive industry in Malaysia, he started selling bicycles, tyres and motorcycle accessories and later expanded his business to used cars, transporters and buses in 1945.

In 1958, on a trip to Japan he noticed the widespread popularity of the Honda Super cub motorcycle in Japan and immediately saw the great business opportunity that this low cost, high efficiency machine would find a similar receptive market in the rapid urbanization taking place in Malaysia at the time.

With great courage, he was able to convince Mr. Soichiro Honda, the bike’s creator, to allow him to import the motorcycles to Malaysia. Although both Mr. Honda and the late Tan Sri Loh did not speak a common language, their common interest in the automotive industry and mutual trust and respect for each other lead to a very special relationship which set the stage for the growth of Oriental.

The late Tan Sri Loh was appointed one of the first overseas distributors for Honda motorcycles in Malaysia and immediately built the plant to assemble motorcycles as he realized the spin offs it would generate – the manufacture of parts and components to support the assembly plant.

After importing Honda cars like the N360 and Civic into Malaysia and the appointment of Kah Motor Co Sdn Bhd (“Kah Motors”), a wholly owned subsidiary of Oriental, to be the distributor of Honda cars in Malaysia, Singapore and Brunei, the late Tan Sri Loh acquired an existing car assembly plant, revamped the company as Oriental Assemblers Sdn Bhd and convinced Honda Motor for Oriental Assemblers to assemble Honda cars for the Malaysian market.

Taking advantage of the Malaysian Government’s Look East Policy and the vibrant prospects for the automotive industry, the late Tan Sri Loh set up several joint venture companies with Honda Motor and other related Japanese companies to manufacture and/or assemble automotive parts, including motorcycle and car engines for the OEM (Original Equipment Market) and REM (Replacement Market) markets. In the process, he also secured several Technical Collaboration Agreements with various Japanese companies for technical assistance to produce the automotive parts.

The late Tan Sri Loh is fondly known as Malaysia’s “Mr Honda” for his close association with Honda Motor and the development of Honda’s business in Malaysia. He marveled at and adapted himself to Honda’s technical excellence and sound management skills and adopted what he could to his own business.

The great foresight, courage and determination of the late Tan Sri Loh and his extraordinary ability to cooperate and develop the close friendships with Mr. Soichiro Honda and others cemented the bond for the successful ventures with Japanese businesses.

With the advent of globalization and the inevitable restructuring of Honda businesses worldwide, Oriental remains a key partner and shareholder in Honda’s car and motorcycle presence in Malaysia. Honda Motor remains a key shareholder of Oriental and a representative of Honda sits on the Board of Directors of Oriental. Currently, Kah Motor continues to retail Honda cars in Malaysia and Oriental continues to distribute Honda vehicles in Singapore and Brunei.

The Honda business benefited Oriental tremendously and provided it with the platform for the late Tan Sri Loh to ride the tide of economic evolution, which together with his ability to change with the times helped diversify Oriental into other business activities. In retrospect, the profile of the late Tan Sri Loh reflects the story of Oriental’s growth.

Being far sighted and always keeping an eye for future sustainability, profits from the Honda business were prudently ploughed back and re-invested for the future of Oriental. As part of his diversification plan for Oriental, the late Tan Sri Loh initiated the investments into oil palm plantations in Indonesia, the acquisition of hotels and resorts in Australia and New Zealand, properties for development and reclamation projects to beef up the Group’s land bank for future development.